Bioremediation: cleaning up the mess

Bioremediation means use of living organism to solve an environmental problem such as contaminated soil or groundwater. Some microorganisms that live in soil and groundwater naturally eat and degrade certain chemicals that are harmful to people and the environment. The microorganisms are able to change these chemicals into water and harmless compounds. This technology includes phytoremediation (plants) and rhizoremediation (plant and microbe interaction). Plants can also be used to clean up soil, water or air; this is called phytoremediation. Rhizoremediation, which is the most evolved process of bioremediation, involves the removal of specific contaminants by mutual interaction of plant roots and suitable microbial flora. 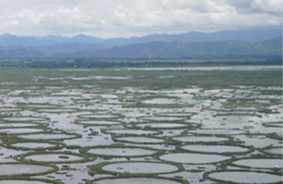 Photo to right: Loktak lake (Ramsar site) in Manipur showing characteristic Phumdis (floating islands). This water body is serving as a receptacle for sewage and agrochemicals. The various aquatic plants are playing a major role in phytosanitation and bioremediation.

Bioremediation which occurs without human intervention other than monitoring is often called natural attenuation. This natural attenuation relies on natural conditions and behavior of soil microorganisms that are indigenous to soil. Biostimulation also utilizes indigenous microbial populations to remediate contaminated soils. Biostimulation consists of adding nutrients and other substances to soil to catalyze natural attenuation processes. Bioaugmentation involves introduction of exogenic microorganisms (sourced from outside the soil environment) capable of detoxifying a particular contaminant, sometimes employing genetically altered microorganism. Rhizoremediation is a process where microorganisms degrade soil contaminants in the rhizosphere (arrow region of soil that is directly influenced by root secretions and associated soil microorganisms). Soil pollutants that are remediated by this method are generally organic compounds that cannot enter the plant because of their high hydrophobicity. Plants are generally not considered as the main mode of remediation in this technique. Rather, the plant creates a niche for rhizosphere microorganisms to do the degradation. Rhizosphere microorganisms are served by the plant acting as a solar-powered pump that draws in water and the pollutant while producing substrates that benefit microbial survival and growth. Root exudates and root turnover can serve as substrates for microorganisms that perform pollutant degradation. Typical organic contaminants (organics) such as petroleum hydrocarbons, gas condensates, crude oil, chlorinated compounds, pesticides, and explosive compounds can be remediated using bioremediation. Typical inorganic contaminants (inorganics) that can be addressed include salts (salinity), heavy metals, metalloids, and radioactive materials can be treated with Bioremediation. Examples of plants applied in phytoremediation: In some cases, the application of bioremediation can have an immediate effect on contaminant concentrations upon planting. In other cases, it may require several seasons before the plant can interact with a contaminated zone at depth.

This site uses Akismet to reduce spam. Learn how your comment data is processed.